Culinary specialties of Provence: the unmissable flavors of the Gulf of Saint-Tropez

It is a fact known to all: gastronomy participates in the fame of Provence throughout the world.

From fish soup, olive oil, tropézienne or even anchoïade, the culinary traditions of the French Riviera are still very present and are still cultivated from generation to generation through recipes and typical dishes that contribute to the attractiveness of the region.

Habits and specialties are even passed down today between historical inhabitants and newcomers to preserve and continue to perpetuate this inimitable gastronomic identity.

It must be said that with a favorable geolocation on the Mediterranean coast, the region's communes enjoy a favorable environment to produce and enjoy many culinary specialties!

In the Gulf of Saint-Tropez in particular, the incredible environment between land and sea offers an unprecedented gastronomic wealth. 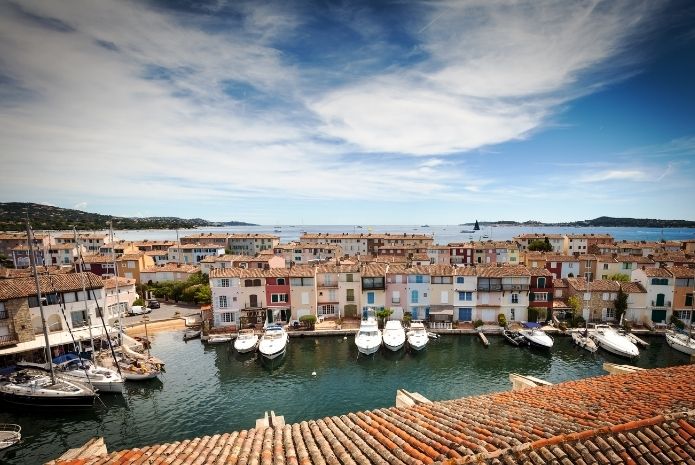 Recognized as a "land of flavors" by both locals and new homeowners who have come to live as their primary or secondary residence, the Gulf of Saint-Tropez is full of Provencal specialties.

Have you just bought a house or apartment in Port-Grimaud and are looking to learn more about the region and its culinary traditions? Are you on vacation / seasonal rental in the Gulf of Saint-Tropez and want to soak up the gustatory DNA of Provence during your stay?

Your real estate agency in Port-Grimaud Logi-Service will take you to discover and/or rediscover the specialties made in Provence to be savored without moderation!


The famous Tropez pie: the emblem of Saint-Tropez

Often imitated but never equaled: the tropezienne is unquestionably the must-have cake of the Gulf of Saint-Tropez.

Having celebrated its 65th anniversary in 2020, this iconic cream cake is the fruit of a very special history taking root in the famous commune of Saint-Tropez, just a few kilometers from Port Grimaud.

Coming to Saint-Tropez in 1955, Polish pastry chef Alexandre Micka created the tropezienne in his small pastry shop. After offering it in the window of his store, the tropézienne pie was then propelled to the forefront of French gastronomy by actress Brigitte Bardot in Roger Vadim's famous film "And God Created Woman".

Having loved this creamy delicacy, BB herself will actually propose the name "Tarte Tropézienne" to the pastry chef who will officially register the brand in 1977.

Since then, La Tarte Tropézienne ® has not ceased to attract gourmets and gourmands from here and abroad. 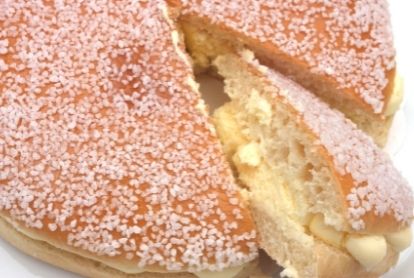 With a special recipe kept secret, this pastry is now owned by Albert Dufrêne's family business, which perpetuates the legend of this unique sweet through several stores in France. The iconic store, meanwhile, is still located in Saint-Tropez so now you know where to go to eat real good Tarte Tropézienne ®.

The wines of the Gulf of Saint-Tropez, the region's treasure

It is a priceless treasure of national and local gastronomy: the wines of the Gulf of Saint-Tropez are jewels recognized throughout the world.

Who hasn't dreamed of sitting in the shade of a parasol to sip on a nice fresh rosé or to accompany their fish dish with a good glass of white wine with the sunny flavors of the south of France!

It's a fact, wines are an integral part of the atmosphere sought after as soon as one comes to visit or settle for a longer period of time in Grimaud, Port-Grimaud and the surrounding towns. 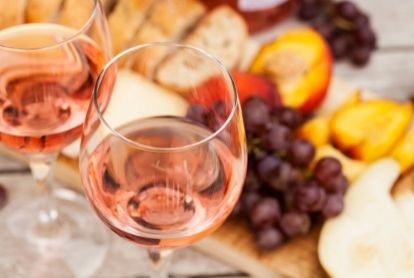 Boasting many vineyards and vintages that are highly appreciated on tables around the world, it must be said that the Gulf of Saint-Tropez enjoys an ideal geolocation to produce great vintages!

The hillsides inland in Cogolin and Sainte-Maxime or settled on the schistous hills of Grimaud produce excellent and varied grape varieties typical of the south of France. It is therefore unthinkable to miss out if you want to fully immerse yourself in the culinary specialties and other mythical flavors of this corner of paradise between land and sea.

The 13 desserts of Christmas: a holiday tradition made in Provence!

As Christmas approaches, it was purely impossible not to mention the famous 13 desserts.

In Provence, gastronomy and the land are treasures whose traditions are perpetuated by both old and newcomers. In the holiday season, the thirteen desserts are moreover very often must-haves that can be found on all tables in the PACA region during the holidays.

Old for centuries according to legend, this holiday tradition is a gourmet way to celebrate Christmas. On Christmas Eve during the Christmas meal, it is customary in Provence to offer 13 desserts to its guests. Representing the 12 apostles and Christ, the 13 desserts of Provence is then composed of different dishes from the south of France and elsewhere.

While the composition of the 13 desserts differs from one commune to another, we always find in the symbolism the four beggars (also called pachichòis in Provencal), the two nougats and theoil pump. The rest is made up of dried and candied fruits or other local dishes. 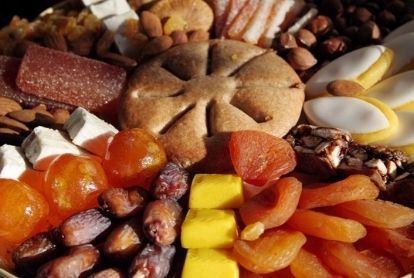 The 13 desserts are served on the night of the big Christmas dinner in abundance, and all guests are invited to taste each of the dishes offered. Thanks to the gustatory richness of this typically Provencal tradition, discover or rediscover the inimitable flavors of the region's products.

Provencal specialties that are a must all year round

Whether you've chosen to move to the Gulf of Saint-Tropez for the long term, whether you've bought a second home in Port-Grimaud or whether you're a seasonal or permanent tenant, Provencal specialties are bound to accompany your presence on the French Riviera.

And for good reason: a rich territory thanks to its land settled between land and sea, the Var and more broadly the PACA region have various emblematic culinary specialties.

The tables of the entire region are daily garnished throughout the seasons with various gastronomic specialties from the Provencal culture. Moreover, local products are highlighted by inimitable recipes.

Focus on some unavoidable specialties capable of sunning your taste buds.

With raw vegetables, steamed vegetables or even fish, aioli can be eaten with any sauce in Provence.

In the Gulf of Saint-Tropez, aioli is often offered on the tables of Mediterranean restaurants. Brought to the forefront by Frédéric Mistral through his Provencal journal called Aïoli, the garlic sauce is today considered an absolute symbol of conviviality in the Mediterranean. 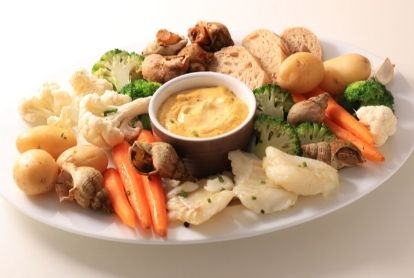 Originally made with crushed garlic, egg yolks and olive oil spiked with a touch of salt, aioli is a gourmet emulsion that often replaces mayonnaise or mustard on Provencal tables.

And it's not just a sauce: aioli is also a complete dish in Provence.

So when you order an aioli at a restaurant, you'll be able to enjoy desalted and poached cod fillets, eggs as well as various steamed vegetables like potatoes, beans, cabbage or even carrots with the famous Provencal sauce in the center of the dish.

Simply treat yourself to a real taste of Provence!

Bouillabaisse to enjoy the treasures of the sea

Fish stew known and recognized throughout the world, bouillabaisse is a dish that has made the gastronomic reputation of the city of Marseille for many years. But it is not only in the Phocaean city that bouillabaisse is made.

All of the cities settled by the sea such as Saint-Tropez in particular also offer bouillabaisse in their restaurants.

Nicknamed fishermen's soup or poor man's soup, this typical Mediterranean dish was born from a recipe made from unsold rock fish by fishermen. Most of the port cities in the PACA region can therefore make their own bouillabaisses with fresh fish from the local fishery. 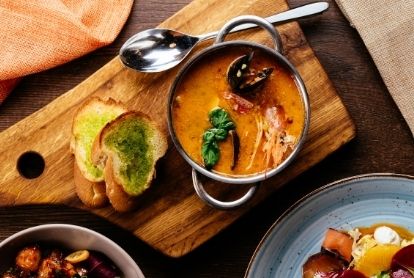 Traditionally accompanied by rouille, grated cheese, croutons rubbed with garlic, potatoes and pieces of fish, this fish stew is now in great demand by visitors from around the world.

Popular throughout France, ratatouille is indeed a pure product of the South of France!

Summery and colorful, theratatouille highlights all the sunny vegetables cultivated by the farmers of the PACA region. Eggplant, zucchini, tomatoes, peppers, all vegetables are mixed with olive oil and seasoning spiced with garlic and onion to give a tasty dish that makes the sun sing on the plate.

Eaten cold or hot, ratatouille is a must-try Provencal specialty.

You couldn't miss the flagship tree of the Mediterranean coast: the olive tree is an unmistakable figure in Provence.

Emblematic of Provence, this tree is not only beautiful, it is also a fruit tree contributing to the local gastronomy. With its sun-drenched and sweet olives, the olive tree notably gives birth to two gastronomic specialties of the region: olive oil and tapenade.

Fêted in Sainte-Maxime in November, olive oil is a real marker in Provencal gastronomy. An alternative to butter, olive oil enhances all traditional dishes with a subtle refined taste of olive and provence. 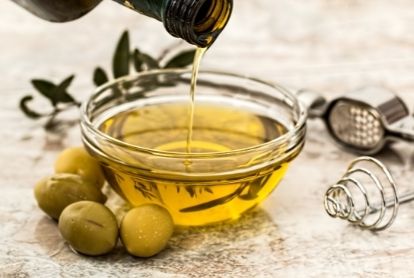 
For its part and like the anchoïade, the tapenade a kind of "cream" to spread. Made with black or green olives, capers and olive oil, tapenade highlights the fine taste of olives produced in the olive groves of the Mediterranean coast. An ideal way to use the natural treasures around!

Anchoïade the star of the aperitif in the south

A salty specialty, anchoïade is an ancestral recipe relying on sea products to create a spread with unique flavors.

Crafted from anchovies and olive oil, anchoïade is typically spread on toast during the aperitif.

For those who love vegetables and freshness, you can also drink your anchoïade with raw or roasted vegetables. This flavorful cream strong in taste brings out all the qualities of typical Provencal cuisine by highlighting simple, local products.

Taste the Provencal gastronomy and the many culinary specialties!"

The Gulf of Saint-Tropez is not only a beautiful location, it is also a rich terroir. The excellent geolocation of Grimaud, Port-Grimaud and other communes in the vicinity allows you to enjoy a varied catalog of gustatory quality products.

Are you looking for a home for sale to settle in the region and to be able to enjoy the plural riches of the Provencal territory? Your agency Logi-Service installed in the heart of the lakeside city of Port-Grimaud accompanies you in your project of installation in Provence.